So the Christmas festivities are over and a New Year to look forward to. The 1st hash of 2017 was hosted by WAG and Over D’ Fence from Bar Colorados, Los Colorados, Arboleas, with 34 attendees who I should add thoroughly enjoyed themselves, I would like to say a massive thank you to all, I am hoping that this level of attendance can be maintained for our forthcoming Hashes.

After meeting at Bar Colorados for Coffee and a natter we all made are way up to the starting point for the Hash which was a short walk away, however, we were missing one of the hares, there was no Spider-man to be found, perhaps he was busy spinning a web for us all to marvel at, but no, he was just late arriving with Romeo in tow, blaming each other as to why they were late despite only having a 400 meter walk to the Hash starting point, however, as they say better late than never Spider-man.

So with the walkers and runners setting off on their respective routes with Spider-man, WAG, Over D’ Fence and our regular guest hare Road Runner Kenny leading the way, with more virgins than you can find in a convent we all hoped that none of our new flock would go missing, luckily no one did, so well done hares. Better try next time!!!.

The best way to describe the route taken by the runners would be to say, challenging, tricky under foot in fact I think that we have should call it the “Only Fools and Horses” Hash, as only fools would try to complete this run and for sure only horses could actually finish it, however, WAG, Key fob, Puff, A&E, Cetra, Dom, Carpet Burns, Can’t Cum Try Again, Tina, Jon, Road Runner Kenny and Over D’ Fence all scaled the track to nowhere, this track was so steep that we needed an oxygen stop half way up, when you do mad things like this there is always one exception , Road Runner Kenny showed off by running all the way to the top, we all stood and watch him gasping for air in admiration. On reaching the summit we all stood there in amazement at the vista which we could all enjoy stretching out before us was a view to behold, well it looked pretty good to me only spoiled by the mist, well I thought it was mist until WAG told me that my sunglasses were all steam up, too much huffing and puffing I think. Once we had all gathered our breath and I told Road Runner Kenny that he had missed a fish hook and he had to go back to the bottom of the mountain to run up again, as they say nobody likes a smart arse, to which he politely told me to go away in jerking movement!!!. So we all set off on the descent from hell, well that’s what WAG said, I didn’t quite catch what she said to Carpet Burns and Can’t Cum Try Again, but I definitely heard the word hell!!!. The runners descending down a very tricky Barney Rubble track were left in awe of A&E who went down like a Derbyshire mountain goat, being his last hash he was determined to go out with a bang, however, after a few stumbles and near falls he was soon brought to a halt, well he had too as WAG was wiggling her way down the first section of the track, what a gent!!. Once through the initial parts of our return route the runners were left to enjoy a leisurely run back to our original starting point.

So to summaries the run, Keyfob I think you need a trip to the opticians as you missed more marks and checks than an Eastern European, but well done your are a true FRBB, WAG you faced your fears of the descent from hell to wiggle again, Road Runner Kenny, well he stopped once we removed the batteries, A&E what a gent your interpretation of a Weeble, he wobbled but he didn’t fall down, truly amazing. In tribute to the others runners I say to you all, fantastic and well done, you came, your saw, you conquered, the cursing and swearing will remain with me for a very long time.

The hash was rounded off with a very special tribute to A&E and Dim Sim, from us all, you are both Hashers through and through and the comments given to you by Norman Bates were fitting and deserved. With our Down Downs completed the only thing left to do was to head for the bar, tapas, paella and far too much beer being consumed, where we all enjoyed the sunny weather and much banter.

Finally, thanks to everyone for coming to the Hash, for some it was hell and that was only the drinking , but as they say, someone has to do it !!!!!.

Until the next time Hashers, ON ON 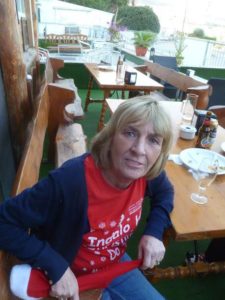 It is with great sadness that we say goodbye to Linda (Flowery Kinickers) who passed away after a short illness.

We offer our love and support to her husband Gary (Slippery Fingers) and their family and friends at this very sad time.

There will be a short service at the Aljambra chapel, 12 noon Friday January 13. The chapel is just out of Albox on the road to Limaria

On On Flowery Knickers – you will be missed!