I was once a mathematician wannabee so I’m starting from first principles:

Now we’ve got that out of the way here is some more detail on the actual mechanics and techniques. Since Rule 1 of the hash is “there are no rules” feel free to ignore any and all of them in a good cause.

A good trail will have variety.

That means it should have some bits where you have to crawl, walk, clamber, wade etc. but it will also have parts where you can just run without worrying where you put your foot next. Hills are good in moderation, so are rivers and railways but too much is as bad as none.

Look at a map first.

Unless you know the area intimately you will save yourself a lot of time if you look at a detailed map to see where looks promising before you actually run around. They aren’t perfect – topo maps are better – but they are free and up to date. The London A-Z is good but an Ordanance Survey map is great for finding areas you may not spot on the A-Z.

Plan the start (and end) of the run

You need to ensure there is enough space for the number of hashers you expect (with suitable parking if people normally drive) and try and make sure the end of the run is somewhere where down-downs can be held without a lot of complaints from neighbours – unless of course you like talking to policemen.

Find a good spot for an optional beer check.

A beer check is a great idea for a regroup so if you have one put it about 2/3rds of the way. If you have more than one spread them out. Good places for beer checks have scenery (mobile or stationary) that hashers can leer at, sorry admire.

Try not to be predictable

If every check has the true trail going left then after a bit even the dumbest hound will figure it out and stop checking right or straight on. So even if the trail is basically a clockwise loop plan the checks and back checks in such a way that the true trail goes a different way each time.

If it takes you, the hare, one hour to run it straight with no pauses then it will probably take the pack an hour and a half. This is as long as the trail needs to be unless you warn people in advance. Unless you want to go out searching for the wounded and slow, don’t make it a marathon. It is not essential to get every last fun bit onto your trail, you can always use some of them in a second trail and very few hashers complain about the trail being too short.

Make it shorter for the SOBs at the back

Think about tempting false trails, back checks and circle jerks which add extra for the first few but allow everyone else to cut corners.

There is nothing that cheers up the back of the pack more than to have the FRBs run past them regularly.

If the pack is warned then you’ll get the shiggy lovers and people will bring towels and a change of clothes. If you don’t warn then you’ll probably get a pack that likes pavement pounding and is scared of heights, darkness and mud. At the end of the trail you will get more whines more than a liquor store. False trails into shiggy are fine though – that just gets the stupid FRBs (like me).

Make it hard on the SCBs

Short-cutters deserve to get lost so try to find places where an SCB will think “I can avoid this by cutting left and running along the road” but where actually there is no way back onto trail without about 2 miles extra. If you have public transport available then using it for part of the run is a most excellent way to really screw up those not on trail.

Be careful of private property (especially in areas where they shoot)

If you can honestly claim that you have run past NO “Private Property” signs where you could see them its much better (its OK to go past them on the way out.. “Oh was this private I’m soooo soorrrryyy!!!!”.)

Remember that you as the hare are a single, silent person and will probably not be noticed by the rentacops or owners but the pack will be blowing whistles and shouting and there will be lots of them so the chances are that the back of the pack will be unpopular.

There is no such thing as a too clearly marked trail. It is not amusing to be continually wondering whether you are on trail and if you only lay trail well when you are trying to screw the pack up then at some point they’ll work it out and short-cut round your clever detour. On the other hand there are sometimes places where you want the pack to go off trail or mill around in confusion so then hide the marks behind things rather than not put any down. 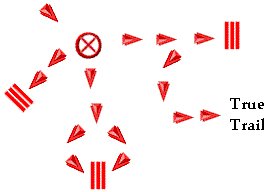 Checks should be tricky

A good check will allow the back (or at least the middle) of the pack to catch up the FRBs. This means you should set checks in places where there are lots of places to look. Also a few false trails (the longer the better) are good, especially if they are set so as to be seen before the true trail.

Backchecks should be convincing

Especially if they involve hills, swamps or other things that the FRBs will prefer to try and short cut around. Good backchecks are convincing if it seems reasonable that the trail should go in that direction, so in a built up area a trail going down a street with a prominent “No Through Road” sign is not convincing (of course if there is another exit then you should use it just to piss off the SCBs who want to run around). Also the Back Check mark should not be visible from a distance (nor should the lack of trail markings afterwards so put the mark just arond a corner or over a wall. Back checks near the end of a run are a good idea to get the pack to regroup as long as the pack either can’t or doesn’t realize it can short-cut the rest of the trail by running through the back check. If you use arrows then one of my favourite back check tricks is to have a pack check where if you runthrough it you start running the trail again.

The difference between a check and a backcheck

Checks are placed in locations where it’s OK for the pack to run all over the place because they won’t accidentally find trail that you didn’t mean them to. Particularly in the case of pre-laid A->A trails, checks on the “out-trail” should not be too close to the “in-trail”, otherwise you may find you have a very short hash!

Backchecks on the other hand are placed in places where all you want to do is frustrate the FRBs. This means that it is a good idea to ensure that … 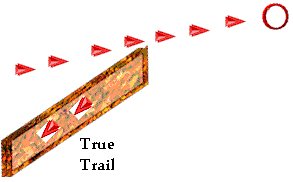 …Backchecks should not be too hard

That is to say if the pack is running on trail and hasn’t hit the back check it should not be able to see the way on but those FRBs who have found the back check shouldn’t find it too hard to locate if they look in the right place (you can sometimes put arrows on walls or rocks that show the true trail if you look backwards).

Especially if your hash sets live hare runs there are bound to be dumb rangers who head off in a totally different direction because they think you “ought” to go there. If you pre-lay a few yards of random trail in completely the wrong direction followed by a big YBF (you’ve been f***ed) mark you’ll give everyone else hours of amusement.